Clara Sánchez named her soon-to-open café Mis Raíces Café after her “roots”, and the name comes with a double dose of meaning.

“I’m originally from Guadalajara, Jalisco,” she says. “I come from a small town where everyone is nice and knows each other. I treat customers like you’re having guests in your home, making them feel welcome. That’s what I bring here to Phoenix. .”

The new barista cafe is nestled between Earth Plant Based Cuisine, El Charro Hipster Bar and Cafe and Testal Mexican Kitchen on Grand Avenue. The quaint 900-square-foot cafe is adorned with hand-painted Mexican dolls and vases. The walls are a mix of bricks and Talavera tile wallpaper.

During a recent visit, she made four frozen drinks. All were rich in flavor and soaked in the Phoenix heat.

“It’s mazapan, it’s Mexican candy, and it’s very fragile,” she says. “You get the little peanut crumbs. The other drink is a dulce de leche, it’s called cajeta in Spanish, and it’s sweeter.”

Cajeta has a runnier consistency and a lighter shade of brown than caramel.

“It’s typical in Mexico,” Sánchez says. “You can use it to dip your churro and put it on pancakes.”

Speaking of sweets, they inspired most of the menu.

“We’ll be changing the menu every week, so it’ll be more pastries, desserts and cookies,” she says. “This week we’ll have cinnamon rolls, confetti scones, churro cheesecakes, chocolate chip cookies and coconut cookies.”

She also bakes treats for customers who are vegan or on a low carb diet.

Back in Guadalajara — about 300 miles west of Mexico City and 1,200 miles south of Phoenix — she helped her parents run a tortilleria. Sánchez moved to the United States when he was 18 and now lives in Goodyear with his family and two children. But she keeps in mind everything her parents taught her.

“I learned from my parents how to treat customers and how to run a business,” she says.

“Please try this; it’s a mango smoothie. In Spanish we call it a licuado de fruta. Chamoy and Tajin drizzle, and we can make a mangonada.”

Chamoy is a red colored syrup that is both sweet and sour and spicy and salty. Tajin is a sea salt spice with chillies and lime. Next, Sánchez serves an ice cold watermelon drink that fades from red to pink to white with a splash of lemonade.

“It’s called a refresher; it contains plant-based energy made from the green coffee bean of the cascara,” she says. 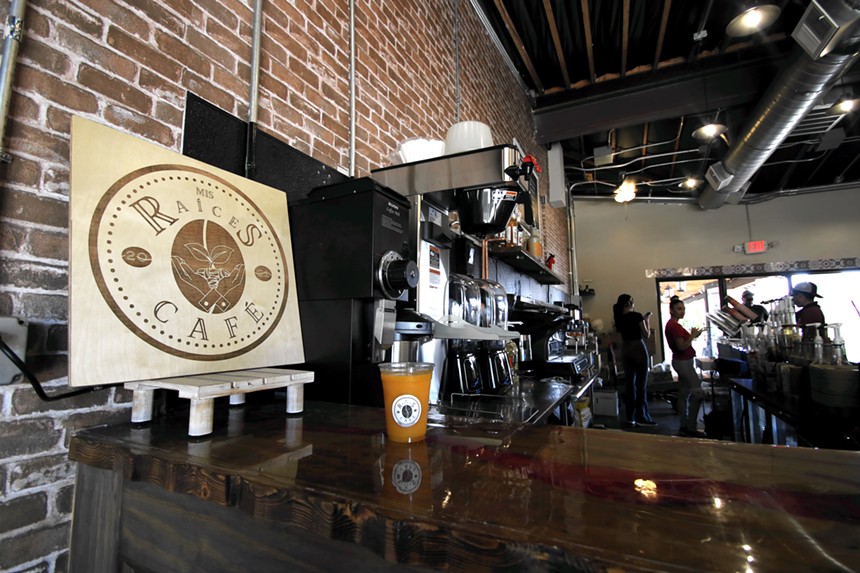 The entrepreneur-turned-barista primarily uses coffee beans imported from Chiapas, Mexico, the state of Mexico that she believes harvests the best coffee.

Before suing the brick-and-mortar shop just outside the Rosevelt Row Art District, Sánchez sold cold brew concentrates and bags of coffee beans emblazoned with the Mis Raices Café logo in pop-ups and street markets throughout the valley.

“I created this logo,” she explained. “If you see the ‘R’ and the ‘S’ in the ‘RAICES,’ the ‘R’ is my husband’s last name and the ‘S’ is my last name. So one hand is his hand and the other is mine, holding what we’ve built and planned over the years.”

Two leaves sprouting from the logo’s hands represent its children, continuing the new cafe’s family theme and celebrating your roots.

Mis Raices Café will have a grand opening ceremony on Saturday, July 16 at 9:30 a.m. and will remain open until 5 p.m. that day. After the ceremony, Sánchez plans to open the store at 6 a.m. Tuesday through Sunday.