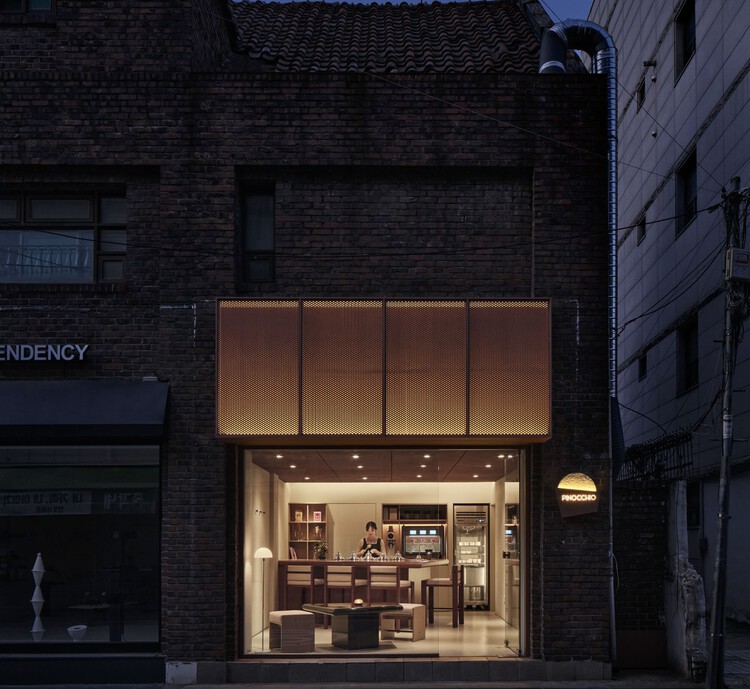 Text description provided by the architects. Pinocchio is an artisanal ice cream restaurant located in the village of Seorae, where the largest number of French people live in Seoul. The client wanted to have a variety of conversations with local people, starting with the story of what kind of ingredients they made, not just giving customers ice cream. And it is said that the cozy restaurant where the customer went as a child remains a good memory until now, and Pinocchio also hoped that it would be a warm memory for residents for a long time.

We thought about what could be considered other than color as a condition of space that feels warm. First, because Pinocchio’s current location is in the north, we used lights inside the facade made of perforated plates so that passers-by could still feel a warm, subtle light. Second, we wanted to round door handles and furniture corners that the customer was touching for the first time and convey a visually smooth feel. Third, rather than looking at each other in a narrow space, we designed a diagonal table that is easier to sit on and have a light conversation.

Finally, the existing building has been well preserved for many years in a quiet neighborhood and creating a new space that blends well with these buildings was a great design context. I chose the color and material of the interior to be one with the old brick feeling of the building.

The interior is a very small space, so rather than the way the walls are constructed, the arrangement of the furniture has been used appropriately. The furniture was made up of diagonal lines, not straight lines, to naturally divide the space where the customer was staying and the space where human circulation took place. In this space, I hoped that the various acts of people visiting this place would make the space vibrant and varied.